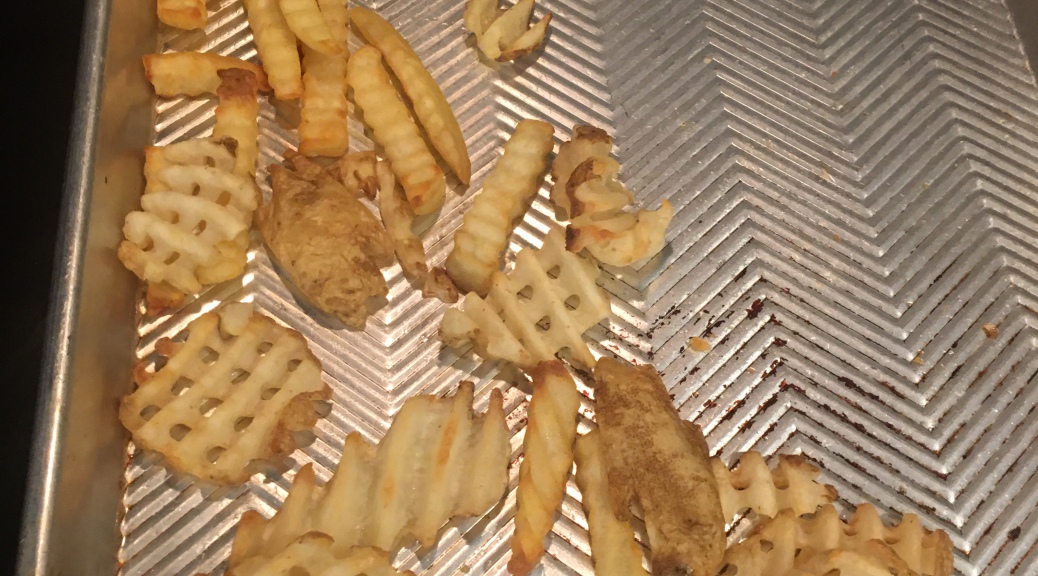 So I volunteered to help decorate and set up our VBS at our church. I left at 3:30pm, and didn’t get home until 7:00pm. I had thought I would either come home to an already fed baby and hubby, with a slim chance there would be food for me too…!

Nope. Neither. The hubby didn’t feed the baby until I got home. And on top of that he was going to go to McDonald’s, but because of the fluke storm he didn’t. Which I am happy about. Watching calories and eating at McDonald’s do not go hand in hand.

Get my tunes going for this long night!

So I scoured the web looking for an easy recipe that would go well with baked fries. The hubby insisted on fries. Can’t blame him. They are delicious.

I decided on chicken, because when it is frozen it defrosts faster than beef. Also since I chose chicken I needed a recipe with a cast iron skillet. So naturally I typed into google, “BBQ Chicken recipe in cast iron.” This one is what I chose.

I selected it mostly for the cook time. But did you see the time it was… 8:20pm. That’s when we were eating dinner. It took me about 1 hr to have dinner done. Not something you want to do after a long afternoon.

The recipe called for 4 chicken breast, but I only ever use 2. I decided to cut them in half and half again. It gave me about 8 pieces. This way they would cook faster.

I didn’t want it to be too difficult to cook them evenly. Just took a couple more minutes than planned.

There were a few waffle fries leftover and some other kind of fry that looked more generic.

The recipe called for BBQ sauce…so I used our favorite. This BBQ sauce is Eli’s meaning of life. Haha 😂

It seems like some of the fries are gone… the hubby decided to test and make sure they were not poisonous. He gave the all clear.

I added a salad for a healthier look. But it is lettuce I grew from my garden! 😎

Look Like Photo: 9. I give it a nine because I didn’t have the chipotle seasoning which would turn the chicken the reddish hue. So other than the red it is similar.

Taste: The fries as always were delicious. 10 for the fries. The chicken was good, but it didn’t wow me. Maybe a 7 for the chicken. The chipotle seasoning probably would have helped. But it was healthier than McDonald’s.

Easiness: 10. The longest part was defrosting the chicken. It truly was a simplistic recipe. I know I said it took me an hour to finish dinner, but 30min of that was the defrosting part.

Overall a simple easy dinner. Which after the four hours of volunteering, that is what I needed.