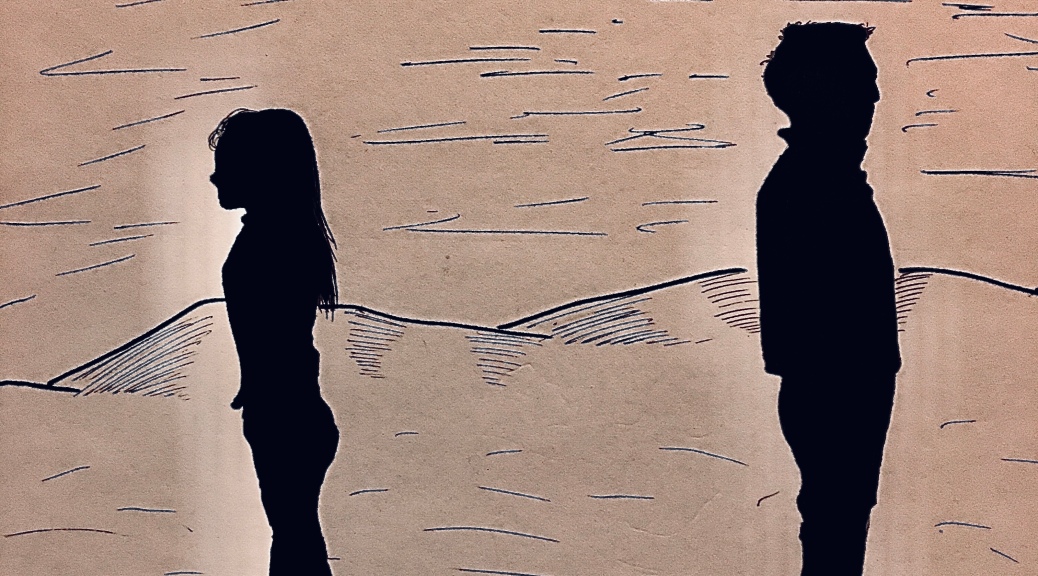 ‘I have no words. I…’I have so many emotions cascading over me that I don’t know which I should latch onto.’ Excited, that it is true Jenny liked me. Sadness, what Jenny must have experienced as my dad…MY DAD! said for her to hide away her feelings; similar to what he is telling me currently. Anger, knowing that I could
have been with Jenny all those months before leaving. Annoyance, at Dad for keeping this from me these last two years. The pain…Jenny must have felt these last two years all alone. I wasn’t there for her. I was gone, and knew nothing. Yes. My swimming has become a success but, how…? ‘As I said before, I have no idea how I should be feeling.’ “Dad? How could you keep all of this from me?”

Dad broke. He collapsed into his own tears.

‘Dad!?!’ I opened the glove box and pulled out a wad of napkins.

Frantically he accepted them. “I…thank you George,” Dad collected himself once again.

But this time I could feel the guilt and sadness exuding frim his posture. “Dad?”

“I regret what I told her that day. I know that it was the best thing for your swimming. I aksed her as a caring father. But after what she went through; I have never forgiven myself. The day Brown called me asking for help, to send her to Europe I was confused. I knew about the rumor but I always assumed nothing could break Jenny. She was strong,” Dad gazed out the window. “But seeing her that day, an empty shell, I knew I had done wrong. I told her to close her heart, and that day, her heart was turned off completely.”

“Her art piece on the wall was vibrant and expressive. I knew it was her piece, but anyone else who would have seen the blank expression, hollow shell of person next to it would have denied that she was indeed the artist. I…I did all I could to make her trip and life in Europe comfortable; I think it was my way trying to fix what I broke.”

Silence filled the truck. The only noise was Jeremy’s continous breathing. I glanced at the time and the half an hour was gone. We needed to leave. “Dad…”

“I forgive you. And it is not your fault about Jenny,” I placed a hand on his shoulder closest to me, and I felt his body begin to shake once more. “Dad?”

“It’s tears of relief. I…have been dreading this day, but also anticipating it. I…thank you so much George,” and he broke down again.

I fished out more napkins. “You good? I have to wake up the dead one,” I thumbed to the backseat.

“Go ahead,” Dad blew his nose and recomposed himself. “I’m good. But I won’t be taking you inside this time. Goodbye Son,” Dad leaned across the arm rest and gave me an awkward hug.

I still accepted that hug, “Bye Dad. Be careful on the way home.” I reached back and smacked Jeremy in the stomache, “Look alive! You’ve got to move!”

I lauged and quickly grabbed my backpack and hopped out. I heard Jeremy thank Dad for the ride and he too got out. “Bye Dad,” I waved into the back window. Dad returned
the wave and pulled away from the curb.

‘It still stings. But I understand it…’

‘Jenny.’ She was sitting on the front porch swing with her mom. I knew it was her, even though her back was to me. Her red hair shimmered everytime her head popped back
into the sunlight. Coach had picked us up from the small airport; there was no way for us to rent a car. On the drive over Coach explained that Jenny was doing better, but that we were not to mention what happened unless she was the one to bring it up. Jeremy was worried since he was the so called start of the rumor; he was worried he would set her off just by being there. Jeremy of course did not voice these concerns to Coach; instead I read them all over his face, as Coach drove us to this home. It was the vaction apartment that Dad, other mom, and I used to come to during winter vacations. ‘Back when our family was actually happy…so like when I was eight years old.’

Coach walked past Jeremy and I and approached Jenny and Mrs. Brown on the porch. He leaned over and kissed both Jenny and his wife on the tops of their heads. He quietly comunicated to them; I thought he was telling them about our presence, but instead he looked into the front door and shook his head.

Jeremy and I were approaching slowly; we seemed to be in limbo. ‘Do we come. Do we wait? Are we going to live out here?’ Coach glaced back towards us and tilted his head up motioning to us to come.

Jenny’s head must have noticed her Stepdad’s quick movement, because just as we were approaching the porch her head turn towards Jeremy and myself.

Those green eyes caught my gaze; ‘Those beautiful green eyes.’ Her gaze shifted to my left. ‘Oh, right. Jeremy is here too.’ I was going to glance at Jeremy, but my eyes were glue to Jenny’s face. I could see surprise and shock initally in her expression; but then almost a second I thought I saw hatered, but it was gone and her
expression now read sadness. This is not the Jenny I remember; her spark was gone. ‘What did I do to this girl?’ I realized that Jeremy and myself had not moved; so I pulled Jeremy along with me as we came to the first step.

“We good to set our stuff down,” I asked Coach, who was standing in the doorway still gazing at Jenny.

“Sure. Come on in,” Coach threw the front door open and headed up the stairs.

Jeremy followed Coach quickly up the stairs; wanting to escape the stares of silence.

I paused only sightly, I returned my gaze back to…those green eyes; they were once again looking at me. ‘Jenny.’ I wanted to talk to her, but I wanted to find the perfect timing. I nodded to both Jenny and her mom, and then followed Jeremy inside. ‘I’ll find the time.’

One thought on “Life Of Two Best Friends: College CHPT 18”